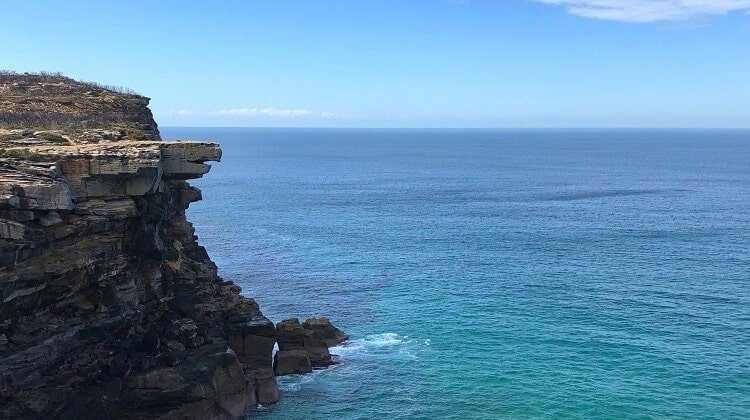 A scenic coastal walk starting at Wattamolla leads to Eagle Rock, an iconic landmark in the Royal National Park that strongly resembles an eagle’s beak.

What’s more, next to Eagle Head Rock is Curracurrong Falls, one of the very few waterfalls in the world that flows directly into the ocean.

Two beautiful natural sights and one picturesque walking track make for a great day out in the Royal National Park!

The pleasant walking track to Eagle Rock and Curracurrong Falls starts at the Wattamolla Beach area, and is a section of the 26 km long Coast Track between Bundeena in the north and Otford in the south.

In the Royal National Park, turn into Wattamolla Road from Sir Bertram Stevens Drive and continue to the parking area (see map location).

Be mindful though that while there is lots of parking available, it tends to get quite busy there on sunny weekends, so it’s best to arrive early in the day.

There is a $12 park parking fee in the Royal National Park per vehicle per day, to be paid either at a ticket booth or at one of the pay machines.

We are going to discuss the scenic hike from Wattamolla to Eagle Rock and Curracurrong Falls along the following highlights and landmarks:

The following map shows these highlights from 1 to 4, starting from the Wattamolla Car Park:

The Providential Point Lookout is optional and can be accessed via a short detour from the car park.

It’s a great lookout, so it’s certainly recommended to do this side trip, as the ocean and coastal views are fantastic.

As mentioned, from the Wattamolla car park, you can either go straight to Eagle Rock and Curracurrong Falls via the Coast Track, or you you can do an extra detour to the Providential Point Lookout.

If you’re going straight to Eagle Rock, you can find the starting point of the track at the southern end of the car park. Keep an eye out for a sign that says Royal Coastal Walk and Curracurrong.

Otherwise, if you’re going via the Providential Point Lookout, look for the start of that trail at the eastern side of the main parking area. This short trail runs parallel to the Wattamolla lagoon and beach.

It’s an easy 350 metres from the Wattamolla parking area to the Providential Point Lookout, which has a small fenced viewing platform.

The scenic views of the ocean and the coastline with its large cliffs are impressive. This is also a great location to try and spot some whales during their migration seasons.

From the lookout, follow the path heading south which connects with the Coast Track and the track to Eagle Rock. This particular intersection is actually not very clear and is easy to miss, especially when hiking northbound.

For that reason it’s a good idea to visit Providential Point Lookout on the way to Eagle Rock, heading south, rather than on the way back, as you might actually miss the path to this lookout.

The walking trail to Eagle Head Rock has recently been upgraded and is now very easy to follow. Large sections of the trail are essentially a boardwalk which makes it a very comfortable hiking experience.

Some may actually consider this to be a bit of a drawback though, as the track never really feels like a challenging bush or coastal walk.

The track continues along the coast towards Curracurrang Gully, with ocean and cliff views that are absolutely breathtaking.

About 1km south of Wattamolla, the track crosses Curracurrang Gully via a set of stepping stones. This is where Curracurrang Cove is located, a picturesque area where the gully meets the ocean.

In summer, this is a great spot to go for a little swim or to have a picnic in beautiful surroundings. It’s interesting to know that this cove was used by the Dharawal people before white settlement, with remnants there still visible.

From Curracurrang Cove, the track continues along the coast and through heath vegetation, heading towards Curracurrong Creek and Falls.

As a side note, have you noticed the subtle difference in spelling?

It’s the CurracurrAng Gully and Cove, and the CurracurrOng Creek and Falls. How one letter can cause so much confusion!

Once you reach the stepping stones to cross Curracurrong Creek, the two highlights of this walking track are literally just around the corner.

Curracurrong Falls is quite a unique waterfall in the sense that it drops into the ocean, as there aren’t many waterfalls in the world like that.

When the winds are strong the water can often be seen being pushed back up, which makes for a pretty spectacular sight.

If the waterfall is not spectacular enough, then Eagle Head Rock (or simply Eagle Rock), located almost next to the waterfall, most definitely is.

For the best views of both the waterfall and Eagle Rock, find a trail that leads down towards a rock overhang.

This is also a perfect spot to have a picnic or to just have a rest, as the rock overhang provides great shelter from the sun, with million dollar views as an extra bonus.

Make sure you stay well away from the rocky edge though, because there is no fencing to protect you.

If you look south, you may even be able to spot a second waterfall where Curra Brook drops into the ocean, a few hundred metres away. It’s a much smaller waterfall that typically only shows itself after a period of rainfall.

Hopefully the above pictures have made you excited about this hike.

Have a look at our list of great hikes in Royal National Park for more hiking ideas in this beautiful part of the world.