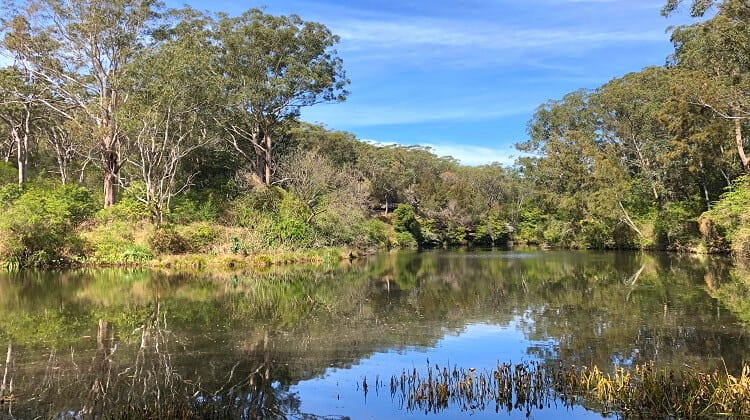 Located only 20 minutes north-west of the Sydney CBD, Lane Cove National Park is a large pocket of scenic bushland surrounding the banks of the Lane Cove River which flows into Sydney Harbour.

A picturesque 10 km circuit walk along both sides of the river makes for an excellent way to explore the natural beauty of this national park.

Often considered as one of the best bush walks in Sydney, this walking track will not disappoint.

The central part of Lane Cove National Park has two main entry points, one in Macquarie Park (map) and the other one in Chatswood West (map). You can start the riverside circuit walk from either side.

From the Pacific Highway in Chatswood, turn into Fullers Road. From there, turn right into Riverside Drive inside the national park, just after crossing Fullers Bridge.

Alternatively, you can turn right into Lady Game Drive just before crossing the bridge. This takes you to the northern side of Lane Cove River.

The western part of Lane Cove National Park can be reached via Riverside Drive off Lane Cove Road. Entry to the park is $8 per vehicle for a whole day.

If you’re using public transport, the national park is accessible from North Ryde train station and by bus from Chatswood train station. Visit the NSW transport info website to help plan your trip.

Popular with walkers, joggers and cyclists, Sydney’s metropolitan Lane Cove National Park extends from Pennant Hills in the north to East Ryde in the south.

The main section of the park sits between De Burghs Bridge on Ryde Road in Macquarie Park and Fullers Bridge in Chatswood West.

This central part is home to the Riverside Walking Track and the Lane Cove Valley Walk (part of the Great North Walk) that together from a moderately challenging yet pleasant 10km circuit trail.

Sydney’s strong population growth in the last few decades has put a lot of pressure on the park, which is now completely surrounded by urban development.

One major issue is water pollution and weed infestation due to storm water run-off from houses, businesses, hospitals and schools in the catchment area.

Let’s hope the park can be preserved for future generations to enjoy.

The two tracks connect at the Lane Cove Weir in the east and at the De Burghs Bridge on the other side (both marked with an X in below map).

The Lane Cove National Park riverside circuit walk can be started either at the Lane Cove Weir or at the De Burghs Bridge.

The below track notes however, describe the circuit trail starting at the Lane Cove Weir heading north.

The walking track that roughly follows the northern shoreline of the Lane Cove River is part of the famous Great North Walk, a 250km walking track between Sydney and Newcastle.

From the Koonjeree Picnic area, cross the Lane Cove Weir at the big signpost, and follow Max Allen Road for a short while until you see a big Great North Walk sign.

At that sign, the track continues up the stairs and into the bush. At the intersection with the Heritage Walk, turn right following the Lane Cove Valley walking track.

From this point onward, the track is an easy-to-follow bushwalk with several highlights along the way, such as sandstone caves and overhangs, mangroves, and picturesque Lane Cove River views.

The turning point of the circuit walk is at the De Burghs Bridge. Follow the track up hill and cross the bridge via the mixed pedestrian/cycle lane.

The noise of the traffic may be a bit off-putting, especially after hiking in the bush for more than an hour. but it’s only temporary.

At the other side of the bridge, head back down into the bush and you will soon see a sign that marks the starting point of the Riverside walking track.

The Riverside walking track along the west bank is a lot easier than the valley walk on the other side of the river.

Surrounded by urban development, the landscape in this part of Lane Cove National Park is very refreshing, with eucalypt forests, casuarina woodlands and saltwater wetlands.

The park is also home to a great variety of different plants, animals and birds.

As you follow the Riverside walking track, keep an eye out for local residents such as swamp wallabies, bush turkeys and kookaburras, as well as eastern water dragons, cockatoos and lorikeets.