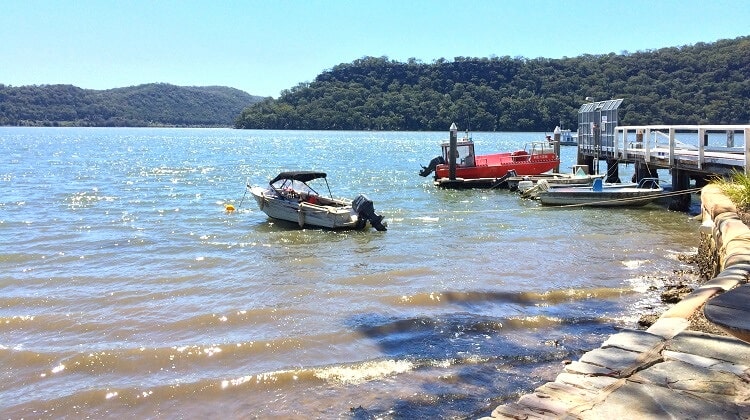 Dangar Island is a charming, traffic free, natural hideaway on the Hawkesbury river, rich in European and Indigenous history.

Catch a ferry from the Brooklyn marina and discover the natural beauty of this very unique and remote island.

Quietly tucked away on the Hawkesbury River, between Little Wobby and Brooklyn, Dangar Island is a bit of a hidden paradise, with a small and friendly population of around 300 lucky residents.

The island covers an area of around 29 hectares, with a 3 kilometres long shoreline.

Connected to electricity in 1948 and to water in 1971, the island now boasts a cafe and shop, a bowling club and a community hall.

Dangar island is also the only residential island on the Hawkesbury River.

Private cars are not allowed on the island, which explains the abundance of wheelbarrows used to carry goods from the ferry wharf onto the island.

Before white settlement, Dangar Island was known as a gathering place for Aboriginal people. Evidence of their history still remains visible in engravings and rock shelters on the island.

Governor Arthur Phillip was the first European to visit the area in March 1788 and named it Mullet island because of the large quantity of mullet he caught there.

In 1864, Dangar Island was purchased and renamed by Henry Cary Dangar, a prominent politician who later became a member of the Upper House of New South Wales.

Henry Cary Dangar leased the island to the New York based Union Bridge Company during the construction of the Hawkesbury River Rail Bridge between 1886 and 1889.

A community of around 400 Americans lived on the island, which was then home to a social hall, a library, and a school.

During the Second World War, Army and Navy personnel used Dangar Island as a base to protect the railway bridge from potential Japanese attacks.

Things to Do on Dangar Island

Dangar Island is not exactly designed for tourists, so don’t expect to find hotels, bars or beach resorts.

But that’s exactly what makes Dangar Island so charming and exciting, and this is also why the locals choose to live there.

It’s a small and friendly community of permanent and temporary residents watching the world go by, far away from the big smoke.

Here are some ideas for things to do on Dangar Island.

1. Walk Around the Island

The 3km walking trail around the island is the best way to explore its natural beauty, admire the local real estate and enjoy great views across the Hawkesbury River.

Keen an eye out for an intersection on Riverview Avenue with a small path that takes you higher up the island. In Kiparra Park you can still find evidence of Aboriginal habitation such as rock shelters.

Located in the southern part of the Dangar Island, Bradleys Beach is enjoyed all year round by locals as well as by tourists and visitors to the island.

It’s a pretty, secluded beach that can be accessed via Grantham Crescent.

It’s a very social beach too, with lots of people picnicking on warm summer days and nights and children playing together on the sand or in the park.

Several major island events are also held on the beach, such as Australia Day and New Year’s Eve celebrations.

What makes this beach even more interesting is that it’s actually one of the very few accessible beaches in the Hornsby Shire.

The island has several great picnic spots, such as at Bradleys Beach and the children’s playground next to the bowling club.

The playground is pretty cool and well-maintained, so if you’re visiting the island with children, make sure you spend some time there.

4. Lunch at the Cafe or Bowling Club

The bowling club (a registered club) serves lunch and dinner (open Thursday to Sunday). Check out their Facebook page for more information.

The cafe and general store right next to the ferry wharf is also a great spot to enjoy a coffee and lunch.

Their menu with various light meals and breakfast options is very well priced (the bacon and egg muffin is delicious), the coffee tastes great, and the views from the terrace are awesome.

As Dangar is an island, the only way to get there is by boat. A ferry service runs regularly between Brooklyn, Wobby and Dangar, seven days per week.

If you happen to just miss the ferry, you can also use a water taxi to bring you to Dangar island. The other option is to use your own private boat.

In Brooklyn, before or after visiting Dangar Island, make sure you have a wander around. The Hawkesbury River views from the Brooklyn foreshore are stunning.

The ferry wharf in Brooklyn is located right next to the train station, so it makes sense to travel by train and avoid the busy highways and motorways. During weekends, train travel with your Opal card is capped at only $8.05 per person for the whole day.

The Central Coast & Newcastle Line takes you from Central Station to Hawkesbury River Station in just one hour. Check the train timetable on Transport Info NSW.

What’s great is that the ferry timetable is nicely aligned with arriving and departing trains, so you would never have to wait very long.

Driving to Brooklyn is easy too. Simply follow the Pacific Motorway to Mooney Mooney Point on the Hawkesbury River, jump on the Old Pacific Highway and turn into Brooklyn Rd to Brooklyn.

Lots of street parking is available close to the ferry wharf.

The ferry trip to Dangar Island is fun and brings you straight into the island mood. Purchase a $8.50 one-way ticket ($4.30 for children) on the boat, sit back, relax and enjoy the views across the Hawkesbury River.

The ferry first brings you to Little Wobby first, after which it’s a short stretch to the Dangar Island ferry wharf on the north side of the island.

The trip from Brooklyn to Dangar Island takes around 30 minutes. Check out the ferry timetable on the Brooklyn Ferry Service website.

Keen to explore other islands in and around Sydney?
Check our our Goat Island guide, or otherwise our Cockatoo Island guide, two super fascinating islands close to the Sydney CBD. Also have a look at our guide to the islands of Sydney Harbour, to learn more about current and former islands that exist in our beautiful Harbour.

From the Dangar Island ferry wharf, simply walk around the island to see what it has to offer. To get to the top of the island, find the small path from Riverview Avenue that takes you to higher grounds. Bradleys beach can easily be accessed from Grantham Crescent.

Grab a handy copy of the map from the Hornsby Shire Council website.