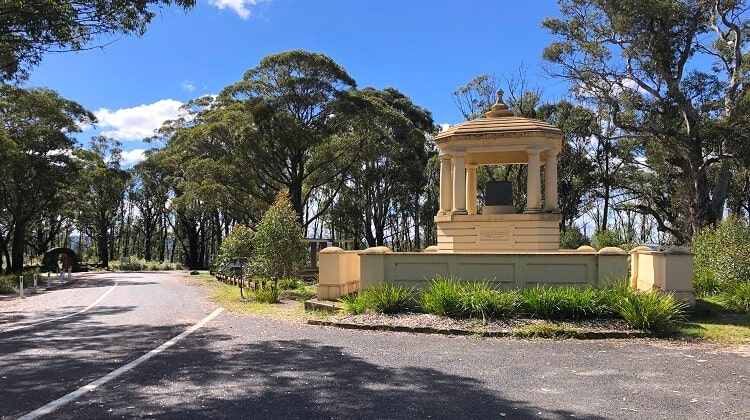 Mount York is a mountain located just outside the township of Mount Victoria, the westernmost village in the City of Blue Mountains.

The summit of Mount York is home to various monuments, memorials and plaques related to the first crossing of the Blue Mountains in 1813 and subsequent attempts to build roads to the plains west of the mountains.

A visit to Mount York is a day well spent, with lots to learn about the history of the Blue Mountains and lots to see from the various lookouts in the area.

The Mount York area offers several walking tracks and lookouts. The two main attractions are the Bardens Lookout and the Mount York Lookout, and both have ample parking.

To get there, simply turn into Mount York Road from the Great Western Highway in Mount Victoria, and keep driving until the end where you will find a large parking area, picnic area, and camp ground.

The Bardens Lookout has its own parking area, and is located less than 1 km from the Mount York lookout area (see map location).

Mount York has an elevation of 1,061 metres, and forms the western boundary of the City of Blue Mountains.

There are four major walking tracks in the Mt York precinct. All of these walks are on historic roads that were built in the 19th century to create access to the plains west of the mountains towards Bathurst.

These historic roads and walking tracks are:

You will find more details on these walks at the two lookout areas.

Built in 1815, Cox’s Road was the first official attempt by white settlers to build a road westbound across the Blue Mountains, following the 1813 crossing of the Blue Mountains by Blaxland, Wentworth and Lawson.

Cox’s Road was built in six months by Lieutenant William Cox, under instruction from Governor Macquarie.

The 160 km long road between Emu Plains and Bathurst wasn’t more than a narrow dirt track, but it was a major accomplishment at the time.

Mount York proved to be one of the biggest challenges for William Cox and his crew, because of the steep descent off the mountain to the valleys.

The historic roads that were built in later years were variations of Cox’s Road to allow for improved access to the west.

At the end of Mount York Road, at the car park, you will be greeted by a large pavilion monument.

This pavilion was unveiled in 1913 by Sir Gerald Strickland, then Governor of New South Wales, as part of the centenary celebration of the 1813 crossing of the Blue Mountains.

If you’re keen to learn more about the history of this fascinating precinct, there are lots of information boards that explain everything about the 1813 crossing and the different roads that were built in the following years.

There isn’t really just one dedicated Mount York Lookout, but rather a couple of fenced lookouts that can be accessed via a short circuit walk.

The start of this circuit walk is where the recognisable stone arch is.

This stone archway, including a stone chair, was built in 1931 to raise funds for the Blue Mountains District ANZAC Memorial Hospital in Katoomba.

From that archway, the path leads to a lookout, and a large obelisk which was erected in 1900 to commemorate the 1813 Blue Mountains crossing.

The trail continues to the fenced Eddy Rock lookout from where you can enjoy beautiful valley views towards Hartley and Lithgow.

From the Eddy Rock lookout, the circuit walk continues along the ridge through bushland, and ultimately connects with the Coxs Road walking track.

Towards the end, keep an eye out for an unofficial lookout point with fantastic district views to the north.

If you do feel like a bit of hiking, the Coxs Road walking track is probably the most logical walk to choose in the Mount York area.

This walk can be accessed from the car park. Simply look for the signpost and information board as per the below photo, and follow the path into the bush towards the village of Hartley Vale.

That walking path is essentially Coxs Road, so you will be walking on a path that carries a lot of history.

The walk to Hartley Vale is approximately 3 km one way, but you don’t necessarily need to do the whole track. If you do feel energetic though, this walk can also be extended by including the Lockyers Road walking track.

The information board at the start of the walk explains these walks in more detail with maps and distances.

The Mount York precint is a great spot to go camping. The campground is located right next to the car park and is free to use for up to four days.

It’s a small to medium sized campground with very basic facilities, suitable for those keen to go back to nature, with walking tracks and climbing spots to enjoy nearby.

You can find more information about the Mount York Campground and other camping sites on the Blue Mountains City Council website.

Bardens Lookout is perhaps the least known official lookout in the Blue Mountains, despite the fact that the views are quite amazing and unique.

The lookout is located on Mount York Road, less than 1 km before the Mount York lookout area. You can in fact walk between these two locations, and leave your car parked at one end.

The car park is reasonably sized, but should it be at full capacity, try parking on the side of the road nearby.

Once you’ve parked your car, the lookout is right there with amazing views to the west towards Little Hartley and beyond.

At the signpost and information board, you will see that there are quite a few bush walking tracks nearby to explore.

The easiest and shortest walk from the lookout is to the Historic Wells via the Ridge Track. The Historic Wells is believed to be the site of a construction camp for the making of Coxs Road.

Keen to explore more lookouts nearby? Check out the Mount Backheath lookout and Hargraves Lookout in the Blackheath area of the Blue Mountains, south of the Great Western Highway.