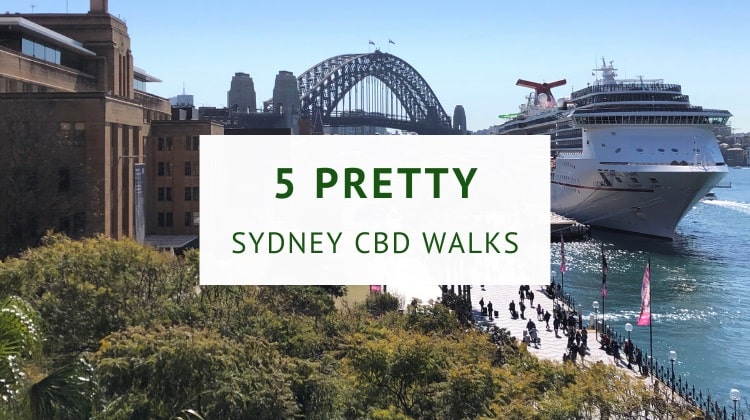 We can all agree that Sydney is one of the most beautiful cities in the world. What’s even better is that Sydney is also a very walkable city. Most of the city’s iconic landmarks are all within easy walking distance.

Walking the city is the best way to see the highlights and get a good feel of what Sydney is about. It allows you to absorb the atmosphere and the culture of our amazing city.

To help you explore Sydney on foot, we have listed five of the best city walks, suitable for the whole family.

In no particular order, check out the following walks in the city.

The Sydney CBD is relatively small, with most iconic landmarks and tourist attractions all within walking distance. The best way to explore Sydney’s highlights is by simply wandering around.

Depending on the pace you maintain and the number of breaks you have, this discovery walk can take anywhere between 2 and 6 hours to complete.

And should your feet get a bit achy after a few hours of walking, the city circle train line can always provide a bit of relief.

Located right above Circular Quay train station, the Cahill Walkway is a little-known pedestrian path along the Cahill Expressway, with incredible views of Circular Quay, the Opera House and the Harbour Bridge.

If you’re looking for a great spot to get the best views of Sydney’s two most iconic landmarks, the Cahill Expressway Lookout is where you need to go. It’s high up on the list of most impressive lookout points in Sydney.

The Cahill Walkway can be accessed via the northern section of the Royal Botanic Garden at Macquarie Street, a lift in the eastern area of Circular Quay, or the Bridge Stairs in The Rocks.

The purpose-built Cahill Expressway Lookout is a viewing platform located halfway through the walkway with several information boards and a few benches to relax and take in the views.

The Cahill Walkway actually extends to the Harbour Bridge Walk, which means you can walk from the Royal Botanic Garden all the way to Milsons Point, taking in all the major highlights of the city of Sydney.

The official starting point of the walk across the Harbour Bridge is at the Bridge Stairs in The Rocks, housed in a somewhat mysterious-looking, art-deco building.

The Goods Line is a partly elevated urban walkway in the Sydney CBD that connects Central Station with Darling Harbour. The walkway follows the route of a once bustling but long-neglected railway line.

Starting at the end of the Devonshire Street Tunnel at Central Station, the Goods Line runs through a vibrant urban hub, home to various educational, cultural and media institutions.

Parts of the old train track have been preserved, which you can still clearly see as you walk along the Goods Line.

Located on the western side of the Sydney CBD, Barangaroo Reserve is a modern Sydney Harbour foreshore park, one of the prettiest parks you can find in Sydney.

This beautiful urban park was constructed as part of a transformation project that has changed an old industrial site into a thriving business, entertainment and leisure precinct, named Barangaroo.

The Barangaroo Foreshore Walk is a 1.5 km shared walking and cycling path that runs between King Street Wharf and the north-eastern tip of Barangaroo Reserve. The path is also referred to as the Wulugul Walk.

Barangaroo Reserve itself consists of several paths spread over multiple levels. There is no starting or end point, so you can simply wander around and enjoy the beautiful surroundings.