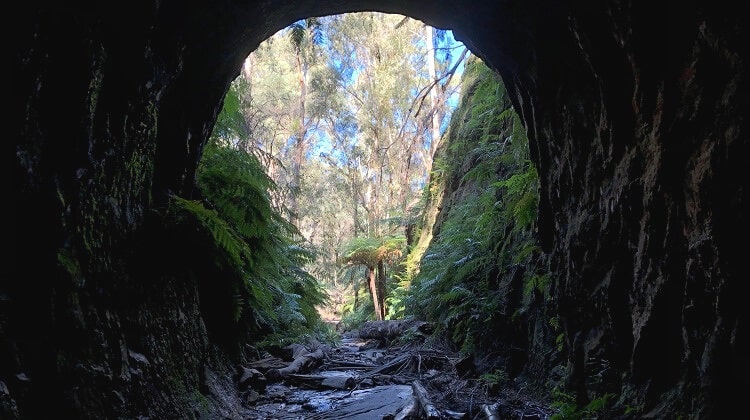 A visit to the Glow Worm Tunnel in Wollemi National Park combined with the scenic walking track to get there, makes for an adventurous day out and about.

The former railway tunnel is now home to thousands of glow worms that are capable of putting up a mesmerising light show.

Read on to find how to get there, and to learn more about this unique tourist attraction north of Lithgow in the Blue Mountains.

The Glow Worm Tunnel is located approximately 35 km north of the town of Lithgow, in Wollemi National Park which is part of the Blue Mountains. Driving there is quite an adventure in itself.

The most logical way to get there is via State Mine Gully Road, followed by Glowworm Tunnel Road, which is an unsealed road.

Follow this road all the way to the end, where you will find a small car park, which also marks the start of the walking track to the Glow Worm Tunnel (see map).

Please note that you’re going to have to drive on more than 30 km worth of unsealed road. While it’s definitely not the worst road, there are lots of potholes, even more so after a period of rainfall.

The road can certainly be conquered with a 2WD vehicle, but we strongly recommend going there with a 4WD vehicle with higher ground clearance. It’s safer and it makes the drive so much more enjoyable.

Glowworm Tunnel Road also includes an old tunnel, which is quite exciting to drive through. It’s a narrow tunnel though, so be mindful of cars potentially coming through from the other end of the tunnel.

Towards the end of Glowworm Tunnel Road, you will see a somewhat confusing intersection with Old Coach Road.

That road leads to a different access point to the walking track, starting from the Old Coach Road car park (see map location).

Most people seem to choose the access point at the end of Glowworm Tunnel Road, so you can keep driving straight at this intersection.

There is in fact another walking track that leads to the Glow Worm Tunnel. This hike starts from Wolgan Road, north of the tunnel (see map location).

The benefit of starting from there is that it only involves 1 km unsealed road, as opposed to 30+ km. The drawback however, is that the walking track from there to the Glow Worm Tunnel is 8 km (return) in length, as opposed to 2 km.

To summarize, there are 3 access points to the Glow Worm Tunnel:

In the track notes below, we are describing the walking track starting from the Glowworm Tunnel Road car park.

About the Glow Worm Tunnel

The Glow Worm Tunnel is an abandoned 400 metres long former railway tunnel that was constructed in the early 1900’s.

It was built as part of a 50 km long railway line that connected the Newnes Oil Shale Mine to the Western Main Line.

As the mining works moved further north to Glen Davis in later years, the railway line became redundant. The line was ultimately dismantled in 1940, and the Glow Worm Tunnel was left abandoned.

The tunnel has a bend and therefore it is pitch black in the middle of the tunnel as there is no sunlight penetrating. Which is a good thing, because that keeps the glow worms happy.

Will you see glow worms on your visit to the tunnel?

Yes, most likely. To increase your chances, walk towards the middle of the tunnel where it’s dark. Turn off your light sources (torch, phone, etc.) and stand still for a few moments.

The glow worms will then start appearing around you, mostly on the walls and the ceiling of the tunnel. It can be quite an incredible sight!

The Glow Worm Tunnel is one of many tourist attractions in this part of the Blue Mountains. Check out our list of top things to do in Lithgow for more ideas!

The walking track from the car park to the Glow Worm Tunnel is approximately 2 km return. It’s a relatively easy walk, with one set of stairs and some sections with rough surface.

Good hiking shoes are strongly recommended, especially for when you’re heading into the tunnel. It’s obviously dark in there, and the surface is very uneven.

The start of the walking track is at the car park, where you will also find a toilet should you need it.

The information board is interesting also, as it tells you more about this part of the Blue Mountains and the former railway. It’s worth a read.

The first section of the walk is fairly straightforward, walking through a patch of scenic bushland.

Depending on recent rainfall, you may even see a small lake as part of Tunnel Creek which branches off from Wolgan River further north.

The track then soon hits a small footbridge that crosses Tunnel Creek, followed by a steep set of stairs through a narrow passage.

Just before arriving at the tunnel, you will see an intersection with the Pagoda Track, which connects with the Old Coach Road car park.

Once you get to the tunnel, grab your torch and start exploring. Remember, to see the glow worms, it’s best to turn off your light sources for a few moments, stand still, and make no sounds.

You can continue walking all the way to the other end of the tunnel, where the track actually continues. It ultimately arrives at to the Newnes Campground, with various intersections with other tracks in the area.

One of these intersections is with the alternative walking track to the tunnel from Wolgan Road, that we mentioned further above.

As you can tell, there are lots of hiking options in this part of the world. For the quickest and easiest way to get to the tunnel, do the walking track as described in this article (starting from the end of Glowworm Tunnel Road).

However, if you’re keen to do some more hiking and exploring in this area, there are lots of options available to you. Just prepare yourself beforehand, and familiarize yourself with all the various walking trails.

The most adventurous walking trail is the Wolgan Valley Circuit Walk, which is a combination of the Pagoda Track, the Old Coach Road Track, and the Glow Worm Tunnel Track.

Have a look at this map for a full display of this 9 km circuit walking track. It’s a fantastic walk where you won’t see too many people around.

Keen to visit more exciting sights nearby? Check out our guide to the Blackfellows Hand Cave, a fascinating rock overhang with well-preserved Aboriginal drawings. 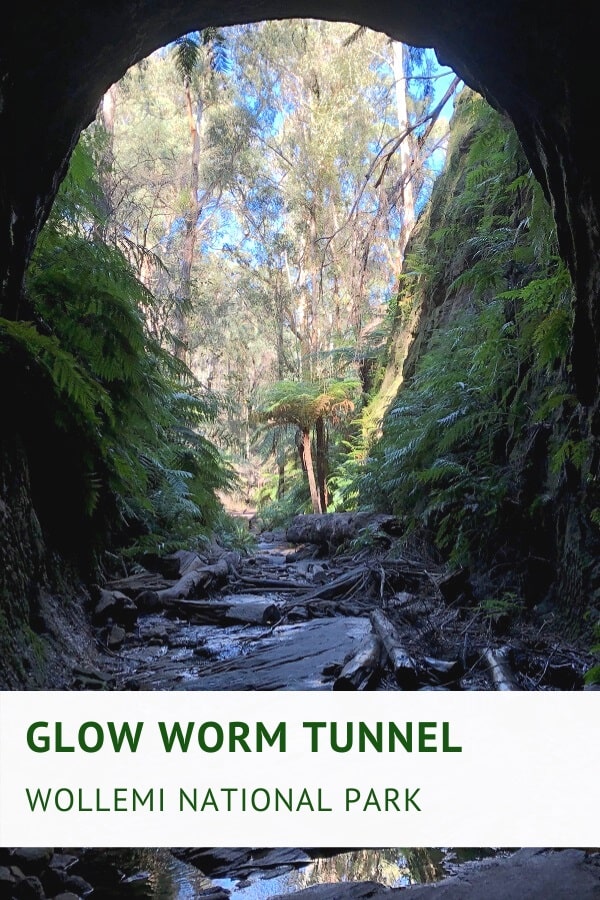