Home » National Parks » Blue Mountains » Things to Do in Leura 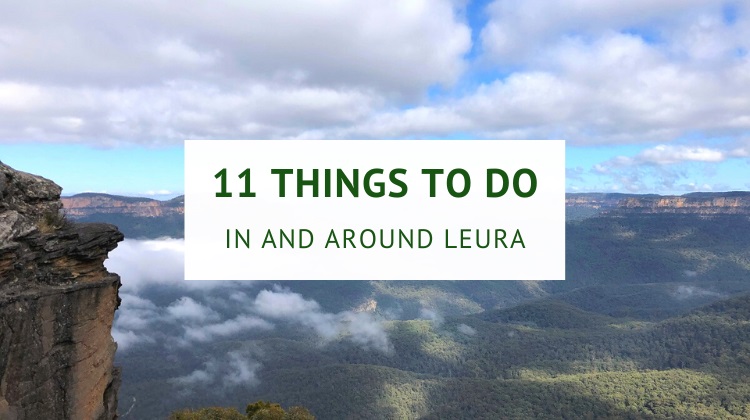 A guide to the best things to do in Leura in the Blue Mountains, from scenic lookouts to walking trails and unique sights.

Leura is a small suburb nestled between Wentworth Falls and Katoomba, approximately 100 km west of the Sydney CBD. The village centre is home to a great variety of restaurants, coffee shops, boutiques, and galleries.

But the area surrounding the town of Leura is the main reason why so many people come to visit throughout the year, with various beautiful lookout points, walking tracks, waterfalls, and so much more to explore.

Keep reading, as we reveal our top 11 attractions in and around Leura, one of the most popular areas in the Blue Mountains.

In geographical order, here is our top 11 things to do in the Leura area of the Blue Mountains.

The Sublime Point Lookout is a spectacular vantage point and picnic spot at the southernmost tip of the Sublime Point headland, overlooking the beautiful Jamison Valley.

A short walking path, which includes a set of stairs and a footbridge, leads to this lookout offering 360-degree views of the Valley, with various popular Blue Mountains landmarks visible in the distance.

The Pool of Siloam is a natural waterhole and small waterfall on Gordon Creek, a creek that drops into Jamison Valley via Gordon Falls a bit further south.

The small waterfall is most impressive after some rainfall when more water passes through the creek, which also makes the water in the pool cleaner.

The easiest and quickest way to access the Pool of Siloam is via a short but steep walking track starting from Gordon Falls Reserve.

The views of the waterfall aren’t the best, especially during a period of dry weather, but the valley views are fantastic.

To access the lookout, follow the short walking trail starting from the information board at the corner of Olympian Parade and Lone Pine Avenue.

The Buttenshaw Bridge is a small bridge between two parts of the Elysian Rock Lookout. The bridge forms part of the popular Prince Henry Cliff Walk between Scenic World in Katoomba and Gordon Falls Lookout in Leura.

The original bridge was built in 1936, but in 2015, the Blue Mountains City Council replaced it with a modern 14 metres long steel bridge.

The views from this interesting piece of engineering, across a deep rock chasm on the cliff edge, are pretty special. It can be accessed via Olympian Parade.

Olympian Rock is another lookout facing the Jamison Valley, and is only a short walk away from the Buttenshaw Bridge and Elysian Rock.

The views from Olympian Rock are incredible, with the Three Sisters and Mount Solitary clearly visible.

Like Elysian Rock, you can access Olympian Rock via a section of the Prince Henry Cliff Walk. Otherwise, you can park your car on Olympian Parade and follow the short trail to the fenced lookout.

To get to Tarpeian Rock and Bridal Veil View, either follow the cliff walk from Olympian Rock or the short Tarpeian Rock Access Walk from Cliff Drive.

The Leura Cascades walking track is a short, family-friendly bushwalking trail along Leura Falls Creek, leading up to a beautiful lookout point above Leura Falls.

Once you’ve reached the lookout, you have the option to continue hiking into the valley and get closer to the waterfall.

The start of the Leura Cascades walking track is at the scenic Leura Cascades picnic area, which offers excellent facilities, such as tables, seating, toilets, and tree-shaded sections.

A full day out in the Leura area of the Blue Mountains is not complete without a delicious lunch and coffee in Leura Mall.

There are plenty of food options along Leura Mall, with so many great cafes and restaurants to choose from. It does get busy there, though, especially on the weekends.

Perhaps try authentic Devonshire Tea with delicious scones and clotted cream and jam, either for lunch or as an afternoon treat. Many Leura cafes and tea shops will offer this.

We are now travelling to the northern side of Leura, where more great walking tracks and lookouts can be discovered, mostly via Mount Hay Road.

The Fortress Ridge Trail is a 7.5 km return hiking trail to a beautiful vantage point that offers panoramic views of the Grose Valley.

A second walk, starting from the same car park on Mount Hay Road, leads to Fortress Rock, another scenic lookout with scenic valley views from a different angle.

The 7 km return walking trail to Lockleys Pylon is quite similar to the trail to Fortress Ridge, but the district views are a bit different.

It leads to the summit of Lockleys Pylon, from where you get to take in beautiful 360-degree valley views.

The walk can be extended to Du Faur Head, with even more views to take in. It requires a bit of climbing to get there, but it’s a fun adventure.

One of the most spectacular walking tracks in the Blue Mountains is the 4 km return walk to Mount Hay. The views along this track are absolutely fantastic.

The trailhead is located at the very end of Mount Hay Road, for which an SUV or 4WD vehicle (with higher ground clearance) is recommended. The road between the Lockleys Pylon trailhead and the Mount Hay carpark can have some rough sections.

There is another walking trail nearby, to Butterbox Point, which is also highly recommended as it offers stunning views of the Grose Valley and the surrounding cliff walls.

Leura is a small suburb in the Blue Mountains, located approximately 100 km west of the Sydney CBD, 5 km west of Wentworth Falls, 2 km east of Katoomba, and 14 km southeast of Blackheath. It is located along the Great Western Highway and the Main Western Railway line.

The suburb of Leura is home to just under 5,000 residents, holds the 2780 postcode, and is part of the City of Blue Mountains local government area.

While nearby Katoomba still holds the reins as the most popular destination in the Blue Mountains, Leura is certainly not far behind. In fact, many consider Leura’s village centre more attractive than Katoomba’s counterpart, mainly because of Leura Mall.

Also worth mentioning is that various festivals are held throughout the year in Leura, with the Leura Village Fair and the Leura Garden Festival being two of the biggest ones.

How to Get to Leura

Leura is very easy to get to, by car as well as by public transport.

The Great Western Highway (A32) passes through Leura.

To get into Leura, take the Leura Mall exit from the Great Western Highway. At the roundabout above the highway, turn left to go into the Leura village centre, and turn right to go into the northern part of Leura.

Travelling by train to Leura from Sydney is incredibly easy.

To get to some of the attractions from Leura station, it’s best to use the 695 Leura and Katoomba loop service. Use the trip planner on the NSW Transport website for more details.

If you don’t go to the Blue Mountains very often, it’s worth staying one or two nights to make the most of your visit.

While there are plenty of accommodation options in nearby Katoomba, Leura is certainly also a good location for an overnight stay, close to many tourist highlights and great facilities in the Leura Mall area.

Hopefully this guide to the best things to do in Leura was helpful and inspiring. Here are some more destination guides you might be interested in: