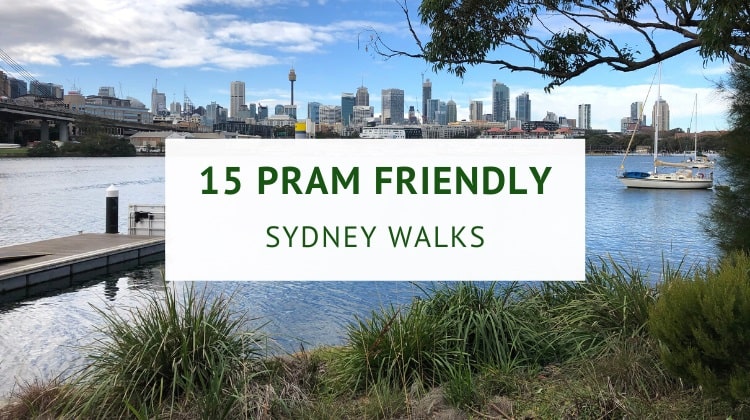 Going for a walk with your baby or toddler is a great way to enjoy the outdoors, stay fit and spend some quality time with your little one.

But it can be a bit of a challenge to find flat and even walking tracks that are not only scenic but also pram-friendly.

Below is a list of pram friendly walks in and close to Sydney where you can safely enjoy the outdoors with your baby or toddler. Most of these walks provide plenty of shade and have cafes and benches nearby to have a rest.

Completed in February 2015, this trail is a popular weekend destination for walkers, joggers and cyclists, all enjoying the beauty and serenity of an idyllic lake surrounded by scenic bushland.

The walking track around the lagoon meanders through a variety of ecosystems with lots of of wildlife to observe. You will also find several historic and cultural heritage sites along the way, in addition to camp and picnic sites.

The Lavender Bay and Milsons Point foreshore walk is a short but scenic walking trail in the lower north shore, offering stunning views of Sydney Harbour and the Harbour Bridge.

From Milsons Point train station, head south towards the Harbour and cross Bradfield Park underneath the Sydney Harbour Bridge.

The park extends to the Broughton St Lookout which is one of the most scenic lookout points in Sydney, with panoramic views of the city skyline including the Opera House and the Harbour Bridge.

From the lookout, follow the walking path around the Milsons Point peninsula along the shoreline. The path continues under the bridge towards Luna Park and the North Sydney Olympic Pool. From there, continue the path on the boardwalk around Luna Park towards Lavender Bay.

This walking path is a bit of an hidden gem yet has so much to offer. There are lots of great cycle tracks and walking paths in Sydney Olympic Park, but the trail following the eastern shoreline is particularly nice.

A good place to start (and to park your car) is at the Badu Mangroves Carpark towards the northern end of Bicentennial Drive. From there, you can either walk through the Badu Mangroves via the boardwalks, or you can follow the walking path towards Powells Creek.

Those two walking paths intersect further north, from where you can continue walking to the Waterbird Refuge and the Shipwrecks of Homebush Bay. The path continues all the way to Bennelong Parkway, where you can retrace your steps back to the carpark.

This beautiful coastal walk starts from the Manly Lagoon Reserve and goes all the way to Shelly Beach south of Manly Beach.

You can commence this walk from any point, but a good spot to start is the Manly Lagoon Reserve Playground, just around the corner from the Queenscliff Surf Life Saving Club.

The scenic and pram friendly Fairlight Walk is the last section of the walking track from the Spit Bridge to Manly.

This walking path runs between the Manly Boatshed at the end of Bolingbroke Parade in Fairfield and the ferry wharf in Manly Cove. The walk takes in a couple of secluded beaches and small parks, with great Harbour views to enjoy.

Even though there is a set of stairs at the Manly Pavilion, you can continue on to the Manly ferry wharf from the Fairlight Walk with a pram. Instead of trying to go down the stairs, continue walking alongside the road for a bit, and the path reconnects with Manly Cove Beach.

From that stretch of beach, you can continue walking past the ferry wharf and on to the southern end of Cabbage Tree Bay.

The best way to explore the unique beauty, heritage and plant diversity of the Royal National Park is simply by wandering around.

It might be best to avoid the Royal Botanic Garden during lunchtime between 11:30am and 1:30pm. There will be lots of joggers doing their daily workouts during those hours, so the path will be a bit more crowded.

The Pyrmont waterfront is a bit of a hidden gem in Sydney, with a beautifully landscaped shoreline between Waterfront Park close to the Anzac Bridge and Pyrmont Bay Park at Darling Harbour.

It’s a flat, pram-friendly walking path from start to finish, with scenic Harbour views to enjoy along the way.

It’s probably best to park your car at Waterfront Park, and simply follow the walking path eastbound along the shoreline. There are various cafes and picnic areas to choose from to have a rest.

Otherwise known as the Bay Run, the Iron Cove Bay Walk is a scenic 7km circuit walking trail around Iron Cove in the Parramatta River, with various playgrounds and cafes along the way.

The track is mostly flat from start to finish making it a very popular spot for runners, hikers and parents with prams. The best time to visit is in the morning when it’s less busy.

Good places to park your car are King George Park, Leichardt Park and Rodd Park. Read more about this fantastic walk in our Bay Run guide.

Of course, Centennial Park in the eastern suburbs cannot be excluded in this list of pram friendly walks in and around Sydney.

With its perfect location so close to the city, Centennial Park is a green oasis with various walking paths, large grassy areas and several cafes to enjoy.

The best way to enjoy Centennial Park with a pram though is by simply following the walking path along Grand Drive, which is entirely flat.

Another advantage of going to Centennial Park is that you will always find a place to park, either along Grand Drive, or on one of the inner roads.

Sir Joseph Banks Park in the suburb of Botany is a beautiful park to wander around with a pram, with a few scenic ponds in the centre and lots of trees and dunes surrounding those ponds.

The park is home to a large playground, a fenced dog park, a sports ground, public toilets, and various paved and unpaved walking paths to explore.

The main walking path is several kilometres long and is paved, and while it’s not entirely flat, it never gets very steep either.

Parking your car close by is very easy. The best spot is at the end of Fremlin Street where the playground is located, and otherwise, Tupia Street close to the sports ground is a convenient spot too.

While most people would visit Cronulla Beach because of its long beaches, beautiful parks and lively town centre, this beachside suburb is also home to one of Sydney’s prettiest coastal walks.

The coastal walk is pram friendly up until Bass and Flinders Point at the southernmost tip of the peninsula.

The flat walking track is well-maintained and offers some very pretty views of the bay against the backdrop of the Anzac Bridge and the city skyline.

A good place to park your car to start this foreshore walk is on Chapman Road in Annandale, or otherwise at the north end of Glebe Point Road in Glebe.

One of the best parts of the Bondi to Coogee walk is the section between Dunningham Reserve north of Coogee Beach and Trenerry Reserve in South Coogee.

The coastal views are very pretty, and with several cafes, picnic areas and a playground along the way, Coogee Beach is a great destination for a scenic pram-friendly walking session.

The flat path behind the beach is very well maintained, and is suitable for prams. A good spot to park your is along Baden Street north of the beach.

Located only 6km from the Sydney CBD, Cremorne Point is a leafy harbourside suburb in the lower north shore. Simply follow the 3km trail clockwise (or anti-clockwise) and within 90 minutes you’ll be back at the wharf.

Please note that the northern part of the walk (where the path goes through suburban streets) has a few steep sections and stairs, and that part is not pram-friendly.

Sydney Park is a 40ha large recreational area characterised by open recreation spaces, rolling hills, wetlands and historic chimneys. It is located in St. Peters, bordered by Alexandria and Erskineville.

The park used to be a large landfill and an industrial brick making site, and as such the park is actually declared a contaminated site. But don’t let that deter you, because the park is considered safe.

Sydney Park is now home to a large children’s playground, various cycle and walking paths, picnic areas, a cricket and AFL oval, and so much more. The park is also a paradise for dogs.

Check out our list of great Sydney parks for more options to go for a walk.