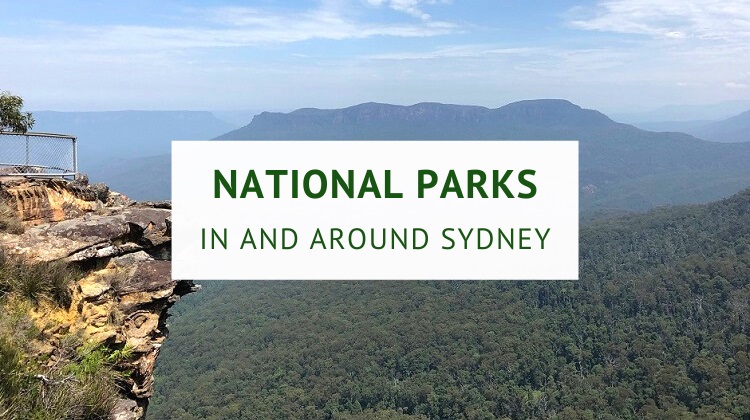 One of the perks of living in Sydney is that it is surrounded by numerous beautiful National Parks. It’s very easy to escape the hustle and bustle of the city and discover the natural beauty these parks offer.

From picnic sites and campgrounds to walking tracks and waterfalls, you can find all this and much more in our national parks surrounding the city.

There are currently more than 200 registered National Parks in Sydney and New South Wales, some very small and others the size of a country, and each park has its unique characteristics.

Below is a list of 8 of the most popular National Parks in the Greater Sydney area, complete with guides for walking tracks, lookout points, and waterfalls.

In no particular order, here are our top 8 national parks in and around Sydney.

One of the most beautiful National Parks in the Greater Sydney area is located in the city’s backyard: the incredible Sydney Harbour.

Many Sydney-siders and tourists visiting Australia’s most beautiful city don’t always realise that the magnificent and unique Sydney Harbour, including its islands, bays and foreshore, is officially a National Park.

Home to a great variety of bushwalking tracks, picnic areas, secluded beaches, lookout points and historic sites, Sydney Harbour National Park truly has something for everyone.

We have shortlisted the best walking tracks in Sydney Harbour National Park that you should try. Some of these walks are quite challenging, while others are much easier and more relaxing.

Did you know that Sydney Harbour is home to 8 islands and 5 peninsulas that used to be islands?

All these islands have a fascinating history, and in our guide to the islands of Sydney Harbour you can read all about it.

Established in 1879, the Royal National Park is the world’s second oldest and Australia’s oldest national park. Originally named National Park, it was officially renamed in 1955 after Queen Elizabeth II passed through on her way to Wollongong during her famous 1954 Australia tour.

From coastal heath, lookout points and waterfalls to bushland, beaches and natural swimming pools, this 15,000 hectares large park has so much to offer.

Because the Royal National Park faces the ocean, it’s only logical that there are lots of great beaches to be found. Most of these beaches are pretty isolated, which adds to the experience.

We have listed the best beaches in the Royal National Park, including detailed information on how to find them and get to them.

With so many exciting bushwalking tracks available throughout the park, hiking is probably the best way to explore this beautiful part of Sydney. Check out our list of great walking tracks in Ku-ring-gai Chase National Park.

The 15 km2 large Bouddi National Park is home to some very pretty and unique bush and coastal walks. Many of these walking tracks include some of the most beautiful secluded beaches in New South Wales.

Located on the southern point of the New South Wales Central Coast near Gosford and Woy Woy, Bouddi National Park is an excellent weekend getaway destination, with many opportunities for hiking, swimming, fishing, camping, and cycling.

Bouddi National Park has a very distinct landscape, with thriving bushland, sandstone cliffs, beautiful coastal paths and isolated beaches. What’s great is that some of these beaches can only be reached via walking tracks.

We have compiled a list of great walking tracks in Bouddi National Park, ranging from an easy 1.5 km to a more challenging 8 km in length.

With remote wilderness, scenic waterfalls, steep gorges, beautiful walking tracks and panoramic lookout points, Morton National Park in the Southern Highlands has something for everyone.

Located around 170 km south of Sydney, Morton National Park is easily accessible from Wollongong, Nowra, Canberra and Moss Vale. A popular destination for birdwatchers and photographers, the park is a great sanctuary for various wildlife.

Located only 20 minutes north-west of the Sydney CBD, Lane Cove National Park is a large pocket of scenic bushland surrounding the banks of the Lane Cove River, which flows into Sydney Harbour.

The two tracks connect at the Lane Cove Weir in the east and the De Burghs Bridge on the other side. Check out our guide to hiking in Lane Cove National Park to read more about this circuit walk.

Dharawal National Park is located around 50 km south of Sydney, not too far from the Royal National Park, and is a rather unspoiled and not-so-well-known protected park.

The park is characterised by an extensive network of creeks, swamp areas and heath vegetation, and is home to various trails, waterfalls, and waterholes.

We have listed the best highlights in Dharawal National Park, from exciting bush walks and cycling trails to beautiful natural waterholes and lookouts.

The Blue Mountains region is arguably one of the most popular tourist and weekend-getaway destinations in New South Wales.

Just over an hour from Sydney, this World Heritage-listed area is home to a great variety of bushwalking tracks, waterfalls, deep valleys and canyons and numerous lookout points with breathtaking views.

Things to Do in the Blue Mountains

To help you decide where to go and how best to spend your time in this beautiful national park west of Sydney, we have come up with an extensive list of best things to do in the Blue Mountains.

Walking Tracks in the Blue Mountains

The Blue Mountains is a paradise for bushwalkers with hundreds of exciting walking tracks. Some of these hikes have been around for more than a century, while others have been opened to the public more recently.

Check out our list of the best walking tracks in the Blue Mountains. Some of them are short and easy trails, and others are much harder tracks requiring some preparation.

Lookout Points in the Blue Mountains

The Blue Mountains has no shortage of impressive lookout points that offer breathtaking views of valleys, mountains, waterfalls and canyons. Some of these lookouts are easy to get to, while others are far away from civilisation.

Check out our list of the best lookouts in the Blue Mountains that offer incredible views.

Waterfalls in the Blue Mountains

With so many creeks and rivers flowing through the Blue Mountains, it’s not surprising that there are quite a few waterfalls here and there. Some of these waterfalls even have natural swimming holes, which makes for a great outdoor adventure.

We have listed the most scenic waterfalls in the Blue Mountains, some easy to access and others much more challenging to get to.

Wentworth Falls is one of the most popular bushwalking destinations in the Blue Mountains region. The name Wentworth Falls refers to the famous 3-tiered, 187m high waterfall, but it is also the name of the town where the waterfall is located.

Deciding where to go and which walking track to conquer in Wentworth Falls can be pretty challenging. Our Wentworth Falls hiking guide provides more clarity around the walks and lookouts in and around Wentworth Falls to help you plan your day out in the Blue Mountains.

One way to experience the true beauty of the Blue Mountains is by booking a professional day tour from Sydney. A tour to the Blue Mountains is an excellent way to see all the highlights in comfort and style. This is especially true if you’ve never been there before and you don’t have your own transport.

We have shortlisted some of the best Blue Mountains tours departing from Sydney. This selection is based on value for money, destinations along the way, duration, transport, inclusions and general quality and reputation of the tour operator.